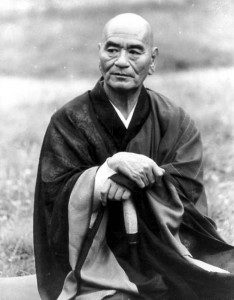 Master Deshimaru (1914-1982), Japanese Zen Buddhist master of the Sōtō school established in Paris in 1965, is known to have introduced sitting meditation (in Zazen) and spread the teaching of Zen in France and Europe. He is one of the main couriers of Zen Buddhism in the West.

Master Deshimaru explains in this work the very close link that exists in Japan between spiritual quest and practices as diverse as the tea ceremony, floral art, an important part of the art of gardens, calligraphy, and, more particularly , martial arts.

The art of concentration and attention to the present moment common to all its practices is one of the bases of Mindfulness. To direct one’s mind in consciousness is the secret of this Way. 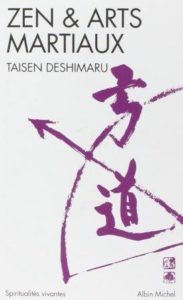 The spirit of Zen was introduced to Japan among a people whose war was their usual occupation. It was the genius of Zen to transform the brutal techniques of war into the arts which no longer cared only about warrior efficiency but self-seeking. The saber, the bow and the arrow, instruments of death became meditation supports.
Under this influence was born the Bushido, code of honor, chivalric discipline which recommends disinterestedness and contempt for death. So much so that Zen was, this way of awakening, called « the religion of the samurai. «
In lively and colorful terms, sometimes even having fun, Master Deshimaru answers the questions of his disciples, without ever making them forget that Zen and martial arts are the learning of life and death.

“This spirit is the same in all martial arts, whatever their tactical and technical differences. Thus, judo (ju: softness-do: Way) is the way of flexibility (yawara). Master Kano was the founder after the Meiji Revolution. The samurai, these fierce warriors, learned yawara, the technique of sweetness. In Japan, the samurai had to learn the arts of war, and those of civil life. They had to study Buddhism, Lao Tzu, Confucius, and at the same time learn judo, horse riding, archery. From my childhood, I learned yawara with my paternal grandfather. My maternal grandfather was a doctor of oriental medicine. I gradually understood that martial arts and Zen have only one flavor, and that oriental medicine and Zen are one. Kodo Sawaki, in conferences, said that their secret is Kyu Shin Ryu, « the art of directing the mind. »

You have to learn to penetrate life. So the secret of martial arts is to learn to lead the mind, Ryu Gi. This forms the basis of bodily techniques. The mind must become substance. Spirit is substance, formless, but sometimes it has form. When the activity of the mind fills the whole cosmos, it seizes opportunities, it has a chance to avoid accidents and can attack ten thousand things in one.

Zazen means to settle in the center of the order of the universe, of the cosmos. Through the practice of zazen, here and now, through our entire being, we exist at the center of the cosmic system. This is the highest dimension we can reach. This truth cannot be achieved through a purely materialist or purely spiritualistic conception. A third conception of the universe would be the fusion of these two visions; not a mixture, not a happy medium, but a deep harmony, because spirit and matter are not separated, they are interdependent as in the human being. «